What's on your mind?

We, as players, could collect ideas for a new game. If anyone who can create a game, to find it. I will start.

Basically many dungeons on a large map, with different stuff, most of them have a city on the surface. The players have a base too.

Hobbit (that would be a hard journey there and back (reference))

The map is a huge island.

The island is divided in regions and territories

There would be multiple, from All of them

These would be arranged in the form of a star, higher level, closer to middle.

In th middle well.....something extremely hard, a really really complex mix of all of them?

2-region of nests(would be like dungeons, just with themed enemies)

In the middle something etremely hard

Basically like the original, just large city a surface, lots of gems, jewelry.....

The regions are in the inner part of the island, further from the middle, there is less darkness. Cities and villages can live peacefully, here you can trade and talk with NPC's.

Humans, hobbits, dwarves, eles....and all that except most of vampires coexist peacefully.

Our hero/ine originates from here. has coast, and port.

2-pirate territory. Next to the treasure region, and wow, with a large coast, with marine territory wth small islands, we find the battling pirate clans.

3- unknown territory, a huge part of land being explored.

Every dungeon would have at least 1 relic, and a grand prize at the end.

Their depth can range from 5 to idk. (boss levels).

Those who have played sprouted, have you seen the room with no entrance? That could also be cool.

If there is something in a mode, that could be good addition then comments!

I know, copying other games is not a good idea, so lets try to concentrate on thinking.

I can not create a game, this is just here in case somebody who can, finds it.

I dare someone to do a no wepons challenge

Hi Does any one have any tips for tengu

No need to eat, no need to worry about monsters.

I was wondering if mage and rogue had swapped spawn rates for hp potions because when i play mage i rarely find any and end up dieing at the second boss because i had nothing to heal but with the rogue i find almost 2 per level every time. I thought this might be backwards simply because the rogue can use his cloak to avoid taking damage by going invisible but the mage has to take damage.

Hi! First off I'm a big fan of the game and have been playing for quite a few months now. This game never gets old! But as for this message; I stumbled across something in the Vamperic Enchantment and wanted to bring it to the communities' attention...

"... funneling it back into the wearer. This effect is stronger the lower the wearer's health."

I thought maybe this was wrong as the enchantment is for weapons, not armors... maybe it should be changed to "weilder" or "attacker's"?

Hoping the developers will notice this message, and thanks again! 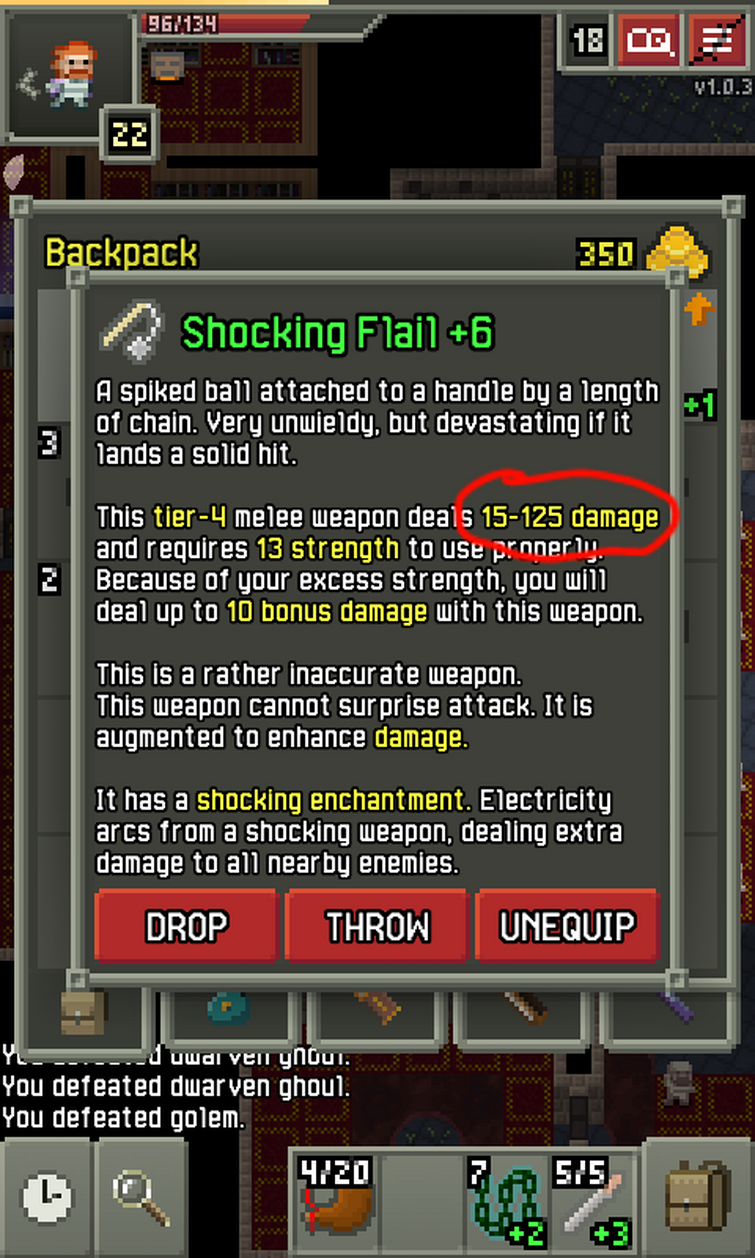 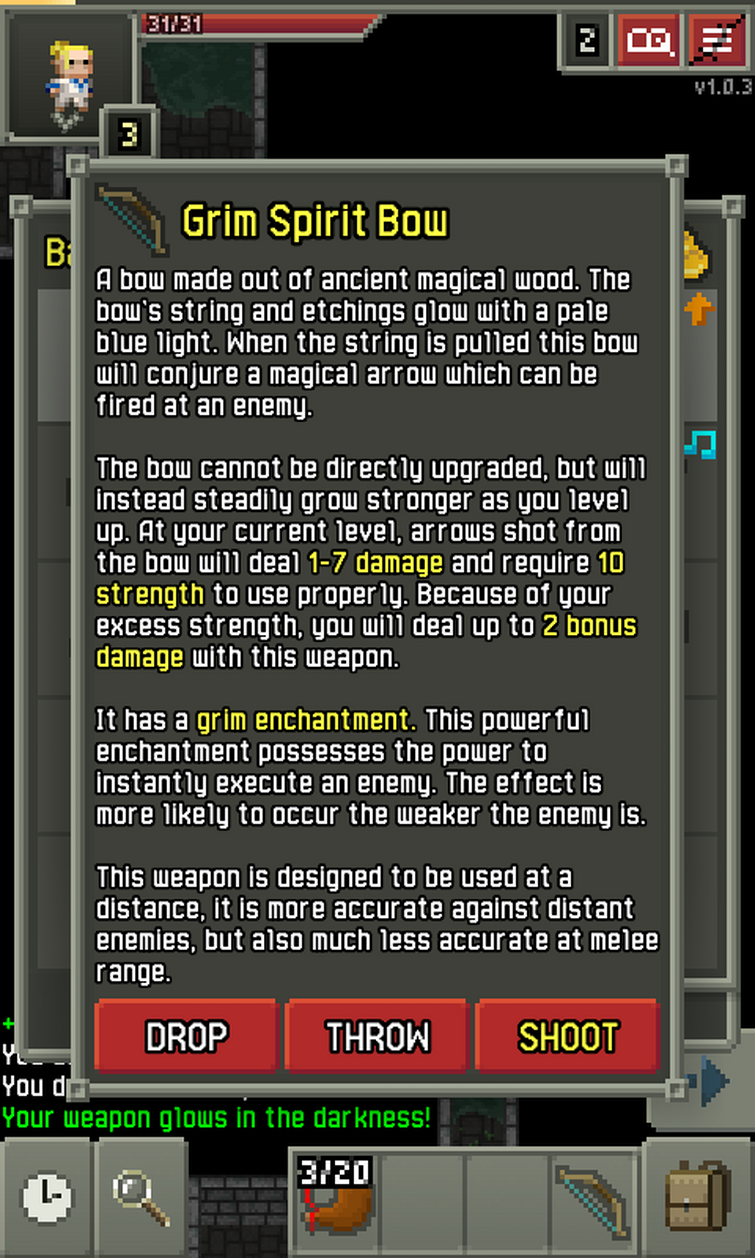 This time with a Relic

So easy with a crom cruach ax, time to enable a challenge or two...

P.S what category does this go into?

I am modding pixel dungeon. The beginner tutorials where a huge help! and after 6 hours of fixing error codes i finally got everything running smoothly. time for the fun part. i have been changing sprites and name and descriptions of things but i want to change some game mechanics and also add new items and potions. are there any tutorials or just help pages for changing mechanics, like "hey i figured out how to add 'X,Y,Z' and this is how" type forums. also i tried making a new potion and it doesnt seem to work. i used to potion of might file, copied and changed the values, then i added the new potion name to the list of name in the potion file. added to the inventory when you start the game and it wont load. there must be something to add too that i cant find. thanks in advance!!

Really, the only special thing about this mod is that there is another potion, the unfreezing potion. When the enemy freezes you and the potion is in your inventory, a box will pop up saying "Would you like to use the unfreezing potion?" If you say yes, you will be un-frozen. If you say no, you will stay frozen for the normal amount of time. If someone thinks this is interesting and would like to make this mod, that would be great. I'm not good at coding.

my phone cant load fandom correclty,my android version is too old,i dont have the app in the play store

Specifically, poisoned mystery meat from a piranha i killed because i thought it was funny

So, I'm a big Pixel Dungeon fan, and recently I decided to try out Shattered Pixel Dungeon. By recently I mean I've had it for about a month. I was thinking about changing some textures for fun, and since I don't have SPD on my computer, I can't go into the files (to my knowledge). Does anybody have a texture sheet that I can download and have fun with? Thanks!

I once killed giant crab on floor 4 and run to the sad ghost. The rewards were leather armor and a shortsword. I wanted his weapon because I already had a leather armor and I felt sonething will be good if I get the weapon. Then I saw it was enchanted. AND the enchantment was...

I still cant understand how ghost dead with a grim weapon but I am glad I get the shortsword.

Look at my inventory... 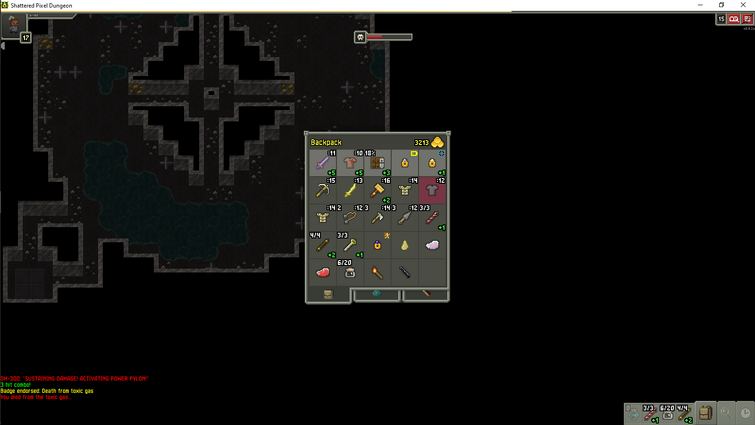 The warhammer was unidentified

So I entered a room with a BUNCH of bones all over the floor and I thought maybe I could get corpse dust for the wandmaker quest? I was playing mage so I started rummaging through the remains there and wraiths spawned. Normal right? But, every time I killed one ANOTHER ONE SPAWNED OVER AND OVER and I ran out of wands and potions and everything. Literally nonstop. Help? Why did this happen? (sorry no screenshot)