The Amulet of Yendor is the dungeon's ultimate prize, and the Hero's sole/main reason for entering the dungeon.

It can only be dropped, or thrown, and cannot be equipped; it still has no activated ability at this time.

Having the Amulet of Yendor in the backpack allows the Hero/ine to ascend to the surface & leave the Dungeon.

However, newly-spawned enemies will be drawn to the Hero/ine, as if a Seed of Rotberry/Alarm trap/Scroll of Challenge had been activated.

When obtained, you are prompted to choose between finishing the game, or continuing to play.

The Amulet of Yendor is placed atop a pedestal, in-between two skull pillars, at the center of the only room at depth 26.

Endgame screen upon obtaining the AoY 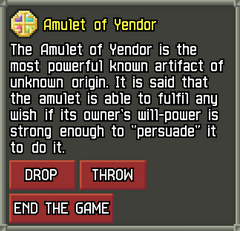 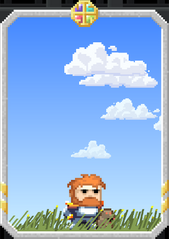 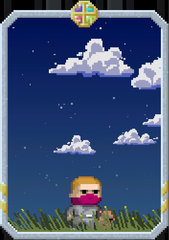