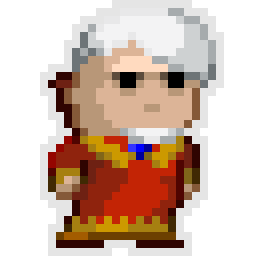 Mage is one of the classes available in the Hero selection menu.

The Hero gains HP, equal to the current Stage level, with an additional point at Boss depths (1-5 HP; +1 at Boss depth), and brief satiety (10 SP), from slaying enemies, but only if the enemy's level cap isn't exceeded & the Hero receives EXP. from the slain enemy.

It has been said that the Warlock is a better choice, as a Battlemage is too reliant on finding a decent wand, in addition to the Warlock’s healing ability.

However, if you do find a decent wand, it would be a good idea to respec into a Battlemage.

After defeating the 4th boss (King of Dwarves), the Hero will be rewarded with the Armor kit.
The armor kit allows the Hero to modify one of his armor into class-specific armor that have special abilities.

Molten earth is the special ability for Mages.
It will root all enemies in view to the spot, unable to move, and will also set them on fire.