Traps can be found throughout the dungeon.

There are 8 different types of traps in the game.

Traps start out hidden (the exception being Tengu's traps), but can be found by searching (either manually, or by chance when walking near them), or using Scroll of Magic Mapping. Traps only generate on normal floor tiles.
Traps become stronger & more common the deeper the Hero descends into the dungeon.
A trap is triggered when the Hero steps on it, throws an item onto it, fires a Wand of Reach over it, or summons sheep on it with a Wand of Flock.
After being triggered, the cell it was in becomes harmless to step on.
Flying enemies can also fly over traps; other enemies will avoid traps.
If the Hero encounters a Room of Traps, there will be a Potion of Levitation in another room, at the same dungeon depth.

Unlike most other objects in the game, traps' effects are not randomized every run, and can be identified by color, or with the Examine button. 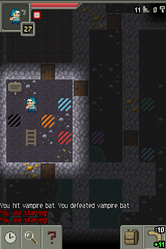 Things get interesting when a treasure room is full of summoning traps.