YetAnotherPD has many differences from Original PD in both the functions of plants and the combinations needed to brew potions, while the alchemy's interface has been also changed: 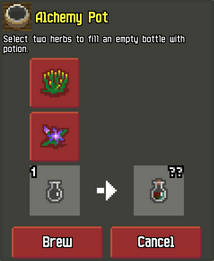 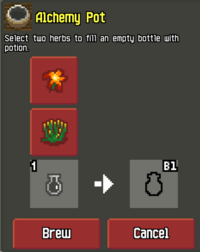 Brewing potions in current YetAnotherPD requires an empty potion bottle and two specific herbs and as in previous versions there are never random outcomes from brewing, when the combination of herbs is correct. Also now already from the alchemy's interface the new potion will get displayed before it gets brewed, so if you don't remember all the combinations or don't want go to the wiki and back to the game, you can just try combining all your available herbs and see for which the interface shows a specific potion (unfortunately, the alchemy's interface will show only the acronym and not the color, so you can't identify unknown potions this way). Empty potion bottles can be found in shops, laboratories and among the loot. Using incorrect herbs brews always a potion named Unstable, which has a question mark in the place of the acronym and causes randomly one effect of the other common potions.

[Until recently brewing potions in YetAnother PD required three herbs, and when all three herbs were of the same type, the outcome was guaranteed and was instantly identified, if the potion was not already identified. Putting different herbs in the alchemy pot resulted in random potions, with a higher chance for the potion that was normally brewed from the herbs that were the majority in the mixture. This is still the basic alchemy mechanic in YetAnotherPD's mod No Name Yet Pixel Dungeon.]

Old players of YetAnotherPD should keep in mind that two herbs and an empty bottle are required for brewing potions in current YetAnotherPD.

It was previously named Dreamweed.

It is a very rare plant and it might not spawn even once in a run.

Note that the Fadeleaf herb does not exist anymore in YetAnotherPD and Dreamweed has been renamed to Dreamfoil.

To read about the potion effects, you should visit the YAPD Consumables page of the wiki.

Herbs now require only one turn to get eaten, satisfy 5% satiety, and do not apply any debuffs when eaten, but either Add HP, Remove Debuffs or apply short Resistance Buffs for 10 turns.

Unlike most mods, Raw Meat is now completely safe to eat, can't get frozen anymore, while burning raw meat will turn it into burned meat, which is a worse version of raw meat (raw meat satisfies 20% satiety, while burned meat satisfies 15%). Raw meat can also be cooked in alchemy pots with herbs and gain herb-specific buffs for 50 turns, same with the effect of the herb when eaten alone but for a considerably longer amount of time (cooked meat also satisfies a bit more satiety, 25%). There isn't the option to freeze meat and turn it to Frozen Carpaccio anymore in YetAnotherPD. The other food items of YetAnotherPD along with their amount of satiety satisfaction are: any herb 5%, small ration 50%, ration of food 75%, dwarven pasty 100% (it is also the only food item that can get the hero from "Starving" directly to "Satiated"),

The meat - herb combinations of current YetAnotherPD that result to different types of cooced meat are: 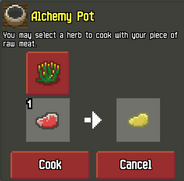 Retrieved from "https://pixeldungeon.fandom.com/wiki/Yet_Another_Pixel_Dungeon/Alchemy_-_Herbs?oldid=87760"
Community content is available under CC-BY-SA unless otherwise noted.